I remember when I first saw his artwork. Robert Morales was coloring his Aztec warrior, and I thought it was unique. Robert is a very passionate artist.

He’s serious when it comes to his drawing skills since he has always tried to improve his skills as an artist. Robert is not only trying to improve his own skills but willing to help anyone who’s willing to improve themselves as an artist. Robert is driven by the captivating stories of art and the fact that he believes that a writer’s story can be brought to life through art. That’s why Robert’s creating the Awesome Ink Club.

The club will not only include artists. It will also include writers.

Awesome Ink has many ideas. One idea is to make a comic series with multiple issues and a short comic strip on the side. If you think being an artist doesn’t get you any money as a career, they’re here to show you otherwise.

I asked Robert how he became so good with his art. He said, “no one is born an artist. You work hard for it.” Now, it looks like his art stands out like his artwork below. 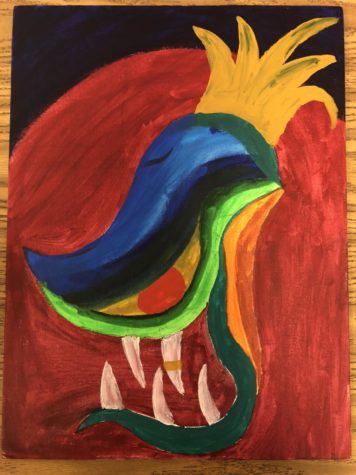 If you’re interested in writing and drawing, this is the club for you. Do you feel like you are not an artist? You’re sadly mistaken if you don’t think you have what it takes to be a good artist because the club can help you. Robert says that the purpose of the club is also to “improve our skills as artists and writers, and grow as individuals.”

Awesome Ink will meet after school on Wednesdays in room 283.