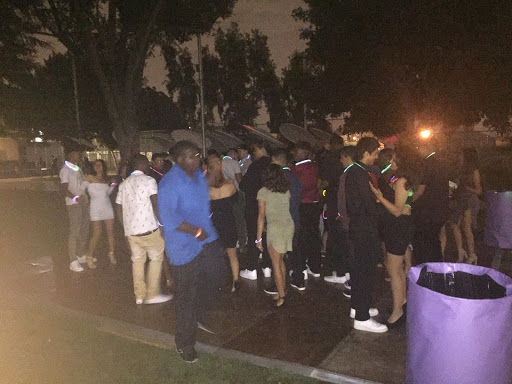 It started off slow but turned out to be fun. When I first arrived, it was not that many people there, and it was a few people waiting to come in at the gate. To me it seemed like a typical day at school, people sitting around and talking to their friends. But even when students were just sitting around, they were on the spot light with their outfits.

When more people started to show up, it started to turn into an actual event. Mainly because of some seniors. The DJs were playing songs that got everybody revved up and dancing. They actually got the sophomores, juniors, and seniors interested in being there.

At one point, a lot of people were on the dance floor, sometimes even circling around a few people. But the highlight of the dance floor was JB. Nobody was dancing harder than he was.

After a while, the DJs played a couple of latin songs like “Despacito” that got everyone on the floor together with their friends and/or boyfriend/girlfriend singing along, dancing and having a good time.

For dinner, they were serving chicken, fries, and bread with a soda of your choice. “It was so good, I was tempted to take a plate home,” said Mr. Garcia. Others said that the food was pretty good.

For best dressed, I think it was Aniyah Turner and Ada Fernandez. Aniyah was wearing a white jumpsuit and Ada was wearing a black dress with colorful glitter in the front.

The cutest couple was Mesean and Zoey.

I talked to a couple of senior students that were there. Ashley Gonzales and Jesse Ramirez were a couple who have been together for about 5 months now. I asked her how Homecoming was going for her and how she liked it. “So far it’s pretty good, but they should add a little more lights,” Ashley said.

I agree with Ashley because it was kind of dark in some areas.  Overall, this was a fun event that brought a lot of people together to make this a memorable night for the seniors in their last year at Manual Arts.

Let’s give a big thanks to Ms. Contreras, and check out one more video below!