Auditorium Pep Rally was the S&^%! 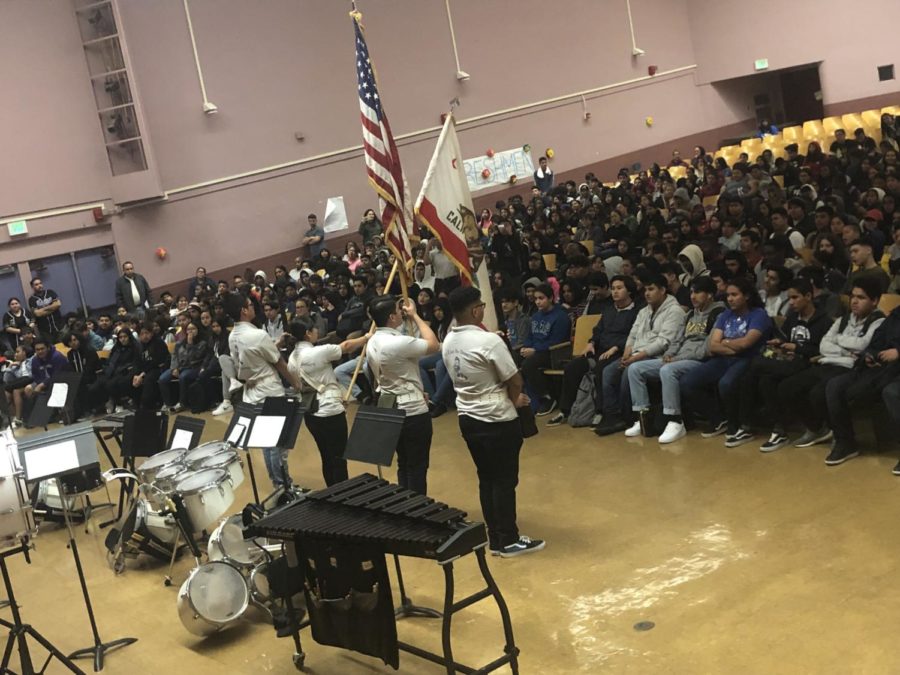 Leadership has done another successful event. The Pep Rally was a huge hype for Manual Arts students. The big event started with Ms. Contreras and her leadership class making and setting up the posters and decorations weeks before the Prep Rally. We give them a special shout out for using their time to make the school better and giving us a little break from school work.

The Pep Pally was a time to congratulate and to celebrate our school sports teams for the season they have had. These players put so much hard work everyday in order to compete with other schools. It is time to show our team the recognition they deserve.

This year’s Pep Rally was held in the auditorium as opposed to the gym. It was indeed different from other years, but I believed it was a success with passion of the hosts, Thomas Whitehead, and Jonatan Juarez, pictured below.

They had good timing for each announcement or event.  At the Pep Rally, we had many performances that were entertaining.

However, in our opinion, the music that was played wasn’t really insync with the performances. So it could have been better.

There was good energy by the students. Teachers were also involved in a student v.s. teacher dance off, which made the students go crazy. Ms. Duke, one of the teacher dancers, says “it’s always a great experience to make such a connection with students.”

So even when the Pep Rally was in the auditorium, instead of the big gym, it was still the s#^t. The gym is too crowded and hot, so there’s not enough room to invite more students. On the other hand, the auditorium is more spacious and more people can attend, and everyone deserves to experience a Pep Rally.

JROTC Color Guard came in the auditorium to start up the National Anthem as Ashley Carter sang the Star-Spangled Banner.

We went around the school to ask random students the following question: “What was your favorite part of the in-door Pep Rally?” Not surprisingly, they all enjoyed the dance battle. Keila Mijango, a junior in SMART, said, “it was a scene that you don’t see everyday.”

We can almost still hear the laughter as Ms. Duke and Ms. Becerra stepped up to battle against Chelsey, India, Anya, Yareli, and Raven. When Mr. Capers came in, the audience went on a cheer streak. But when Capers shook his cheeks, there was an uproar!

The Choir Band that went up is actually called “Flourist Attraction” and played a nice mellow song called “Losing You” by Boy Pablo. The current members are Antonio Zavala, Isreal Cruz, Christopher Ayala, Carlos Jaramillo, and Luis Zavala. They have done a fantastic cover song, and we will see when they perform their own concert in school.

Who else made a presence?

The Swim Team made their debut as they dived onto the stage.

The Softball Team stole second base and made a home run on the stage. Goodluck in the playoffs, ladies.

The Track team ran across the stage for a picture as they were in a race.

The Tennis Team came up and made a racket to reveal their 8th year league championship.

The Armed Rifle Team raised the attention that they hold the title of being #1 in the LAUSD.

The Unarmed Team’s performance got them props for their perseverance.

The Cheer Squad tumbled onto the stage to perform their cheer before the big competition.

The Concert Band played their beautiful mellow music; they had the power to inspire us and put chills up our spines.

The Volleyball Team went up the stage and spiked the energy of the crowd.

Clearly, we never know what leadership has under their sleeves, so we are definitely looking forward to the next Pep Rally. Check out the picture gallery below.